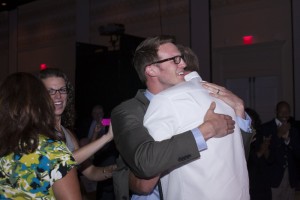 This is me and my Dad hugging as they called my name for the 2012 World Championship of Public Speaking. He whispered in my ear, “That was the best $60 I’ve ever spent!”

In 2011, Ryan joined Toastmasters because he said “like” way too many times in one sentence. He was unable to afford his first year of dues so his dad put up the cash! Two years later, he stopped saying like, developed his leadership and communication skills, become part of an amazing group of people and became the Youngest World Champion of Public Speaking in history.

So in 2013, Chelsea and Ryan started the Mark F. Avery (MFA) Grant in honor of Ryan’s father and to help those aged 18-25 who cannot afford Toastmasters, but want to join, to pay their first year of dues. They currently accept one new member a month and would love to help you, or someone you know, get involved in this wonderful organization.

Ryan believes in using your voice to make a difference and supporting those who have supported you! Toastmasters has been so fantastic to Ryan and he can only imagine how awesome it will be for you!

Download the application and send it to ryan@averytoday.com with a subject line that reads “MFA GRANT APPLICATION.” You can also send a hard copy to AveryToday, Inc. PO BOX 9344 Portland, OR 97207. We are looking forward to reading your application and helping you get started with Toastmasters today!

Find a club near you. Search the Toastmasters.org website now.